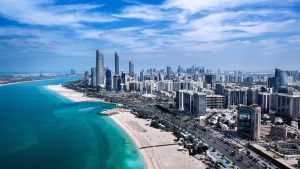 The first Abu Dhabi Triathlon took place in 2010. It was organised by IMG, consisted of a unique 3km swim, 200km bike and 20km run and featured a $250,000 prize purse. Eneko Llanos (SPA) and Julie Dibens (USA) were the first winners.

In 2011 they invited both recent World Champions Chris McCormack (2007, 2010) and Craig Alexander (2008, 2009) to the Emirate and billed it the battle of the Champions. However it was Fredrik van Lierde (BEL) and again Dibbens who won.

2012 caused a lot of drama when Starykowicz (USA) crashed into a volunteer. The volunteer was in critical condition and put in an induced coma (and recovered eventually). Starykowicz could not leave the country for six weeks during police investigations and till he paid some kind of bail, as he had left the scene of the incident (i.e. he continued his race).