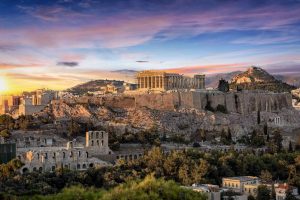 The Athens Olympics was held on a demanding course in searing summer heat. The hilly bike course blew the race apart in both the men’s and women’s race. As with all races, elation and devastation are so close and this applies especially to the Olympics where the stakes are incredibly high.

Loretta Harrop (AUS) had the race of her life. She led the race from the start, but was overtaken 150m before the finish line by a flying Kate Allen (AUT). Heartbreaking!

In the men’s race it was six men that finished the bike well ahead of the rest. The group included the slated favourite and current World Champion, Bevan Docherty (NZL). Three of them stayed away on the run, but Docherty got out-sprinted by his countryman Hamish Carter. Carter’s win was seen very much as a redemption for his failed campaign for the Sydney Olympics, when he was one of the favourites, but finished a disappointing 26th.

The real Greek tragedy is that the sports-infrastructure from the $6 billion Athens Olympics are hardly used and most of it has gone to waste.