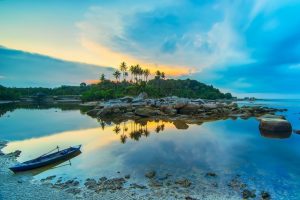 Bintan has something that Singapore doesn’t, which is crystal clear blue waters and quiet roads. Tribob (now MetaSport) saw its potential as a triathlon destination and launched the Bintan Triathlon in 2005. MetaMan Bintan followed in 2012, when there was a sudden demand for long distance in the region after the demise of the China, Malaysia and Singapore Ironman events. MetaMan Bintan consisted of an iron-, half-iron- and ‘blitz’-distance and boasted the second biggest prize purse in the world after Kona of $300,000. In 2015 the full distance was discontinued when MetaSport took a license to turn the event into an Ironman 70.3.
Over the years Bintan has hosted a number of triathlon legends with Cameron Brown, Caroline Steffen, Courtney Atkinson, Brad Beven, Tim Reed, Chris McCormack and of course, Kate Bevilaqua.