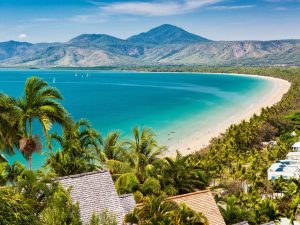 Show me the pineapples!*

Show me the pineapples!*

1982 saw the first triathlon in Cairns. Triathlon legend Brad “the Croc” Beven started triathlon because of it and earned a spot in Triathlon’s hall of fame, winning the ITU World Cup Series four times from 1992 to 1995. He was nicknamed “the Croc” because he would train in crocodile infested swamps around his parent’s cane farm in Miriwinni, 65km south of Cairns.

Cairns’ recent history started with the Challenge brand in 2011. (Chris McCormack and Rebekah Keat won). However, with the purchase of organiser USM by Ironman in 2012, the Cairns event consequently turned into an Ironman. The 2011 Challenge Cairns event was ambitious with a relatively high prize purse of $100,000 on offer. For the past few years Cairns has hosted the Ironman Asia-Pacific Championships with currently a $150,000 prize purse. The 2019 champions are Kiwi’s Braden Currie and Teresa Adam.

There’s a reason the race is held in June. It’s because blue bottle jellyfish inhabit the waters from November to May.