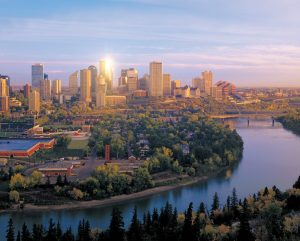 Edmonton was supposed to host this year’s ITU World Triathlon Series Grand Final on August 17-23, but they already pulled the plug back in April.

So 2014 will be for now the most recent Edmonton ITU Grand Final, when Champion Alistair Brownlee (GBR) shared a podium with Spaniard’s Gomez and Mola, while Gwen Jorgenson (USA) was joined by Kiwi’s Hewitt and Samuels.

Edmonton hosted its first World Championships in 2001 and has hosted ITU World Cup and World Triathlon Series events since. The 2001 event was the first big title since the Sydney Olympics and was won by Peter Robertson (AUS) and Siri Lindley (USA).

(Siri Lindley is now better-known for being a successful coach of Ironman triathlon star Mirinda Carfrae among others.)

Canada has hosted more ITU World Championships than any other country, with the World Championships in Huntsville 1992, Montreal 1999 and Vancouver in 2008. Maybe not surprising considering, Canadian Les McDonald was the ITU President till 2008, and that the ITU’s office was located in Vancouver from its inception in 1989 till 2014 (after which it moved to Lausanne to be closer to the IOC). Close ties with ITU continue.

Les McDonald was the driving force of ITU and is credited with getting triathlon into the Olympics (within 6 years of establishing the ITU!) and placing the women’s race on equal footing with the men’s. From the start ITU has made a point of providing equal prize purses and media attention to both genders. He had a clear vision of making triathlon a spectator sport with multi-lap courses and spectator stands, willing to ‘sacrifice’ the non-drafting bike rule in the mid-90s.

Driving and unrelentingly pursuing his goals he picked many a fight, including memorable ones with triathlon brands like Ironman and Lifetime Triathlon. At the height of the conflict in 2004 ITU stopped sanctioning their races. This was quietly reversed a few years later. Ever since Ironman has joined WADA and rules between ITU and Ironman have been aligned.

Fun Fact: Until 2004, ITU was run out of (now Vice President’s) Loreen Barnett’s home in Vancouver.