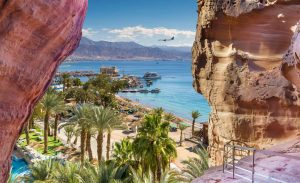 Israman is an iron distance triathlon in Eilat that took place from 1999 to 2001. It re-started again in 2006 and was given a boost by being featured in the top-10 best races of Triathlete magazine in 2009. It still carries this reputation of a well-organised event, with a stunning course and the friendly atmosphere of a community race. Don’t go there for a PB, because the1900m of elevation and wind make the undulating bike course hard going.

Although professional athletes do frequent the event – Nicola Spirig won the half distance last year – it has never boasted deep pro-fields with big names.

Eilat is not far from Neom in Saudi Arabia. Neom is an ambitious city project from the wealthy Saudi family. Super League Triathlon announced earlier this year that it would organise a race there in 2020. Interestingly the course would be built from scratch, just like the city, as currently there is not much of a road network to speak of.