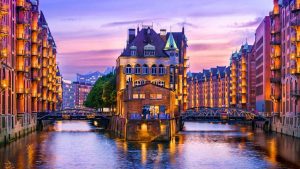 The title of biggest triathlon with over 10,000 participants can be argued about. However, it is undeniable that the Hamburg Triathlon draws one of the biggest spectator crowds at an estimated 250,000 spectators. The event started in 2002. From its inception it organised an ITU World Cup and in 2009 joined the ITU World Triathlon Series. Hamburg is with Yokohama the only city that was part of the Series from the start.

In 2007 Hamburg organised the ITU World Championships. To the delight of the home crowd it was Daniel Unger (GER) who won the men’s race and became the first (and only!) German ITU World Champion. Vanessa Hernandez (POR) was the women’s champion.

Since 2013 Hamburg is also the home of the Mixed Relay World Championships, a relay team event of 2 male and 2 female athletes that is debuting at the Olympics in Tokyo. The past two years France has taken the title. It is quite an exciting format to watch if the big guns show up.

In contrast to the meagre results in ITU racing, German athletes have been very successful in the long distance events. The past six years German men have won the Ironman World Championships title and accumulated an amazing total 12 out of 18 podium places.