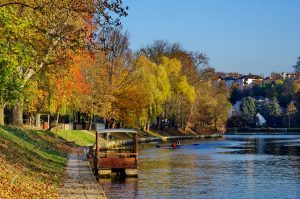 San Diego may be the birthplace of modern triathlon. Unbeknownst to the good people in San Diego half a century earlier triathlons were already being organised in France, albeit under a different name. The first reports of an swim-bike-run event called “Les Trois Sports” was in Joinville-le-Pont in 1921. For a short period this type of events were held in a few places in France, like Marseille and La Rochelle.

There is a Paris Triathlon, but it doesn’t have the prestige of the other big cities that we are going to visit.*** Although there is an epic triathlon that finishes at the Arc de Triomphe. Enduroman Arch to Arc is an ultra-distance triathlon that starts at London’s Marble Arch with a 140km run to Dover, a 36km swim across the channel and a 290km bike to Paris. Only 45 solo-athletes have completed this humongous task, and as many have failed, mostly on the swim – swimming across the channel is a feat in itself.

*** That may change now ASO (the Tour de France organiser) has taken over the organisation of the Paris Triathlon in 2019.