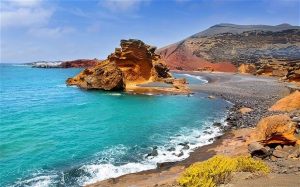 The hardest Ironman on earth

The hardest Ironman on earth

Lanzarote is probably the hardest Ironman in the circuit thanks to its unique, but hard 1-lap bike course with a total of 2,500m elevation and occasional strong winds. In 2011 the conditions must have been quite favourable, as both course records are from that year. Though, let’s not take anything away from Timo Bracht’s (GER)  and Rachel Joyce’s (GBR) records of 8:30 and 9:25. Both were formidable athletes and particularly cyclists.

Fredrik van Lierde (BEL) and Nikk Bartlett (GBR) are the reigning champions. Paula Newby-Fraser (ZIM) is the only athlete who has managed to win Lanzarote three times.

Lanzarote is still one of the few, if not the only Ironman in Europe that is organised by a licensee. Race director Kenneth  Gasque is the man behind triathlon on Lanzarote. He started the Vulcano Triathlon in 1984 and wanted to bring an Ironman to the island soon after. Roth pipped him to the line to be the first Ironman in Europe in 1988. However, he got his Ironman in 1992. Since 2010 he has launched Ocean Lava Triathlon and the Ocean Lava Triathlon Series with races across Europe.