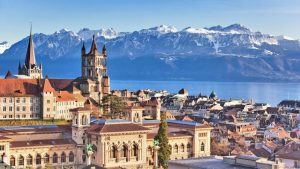 ITU moved its headquarters from Vancouver, Canada, where it had been based since its inception, to Lausanne in 2014. Lausanne is, significantly, also the base for the IOC (International Olympic Committee). …and maybe the friendly tax climate spoke for the move too.

In 2006 Lausanne hosted also the old-style single-day ITU World Championships. Tim Don (GBR) and Emma Snowsill (AUS) claimed those crowns. Snowsill is the only woman to have won 3 world titles (2003, 2005 and 2006).
In the men’s competition there are more prolific winners: