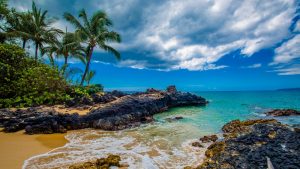 The “Cross Triathlon” on Maui began in 1996 as the Aquaterra, and was later renamed the XTERRA.

The main difference between cross triathlons and regular triathlons is that the bike and run phase are off-road. Distances vary widely, depending on the terrain available, the “World Championships” in Maui are held over a distance similar to Olympic Distance, but with a shorter, 30km bike, compensating for the rough terrain and steep climbs. ITU also organises cross triathlons, but Maui is considered “the Kona of cross triathlon”.

Although there are specialist in this discipline, “on-road” triathlon stars feature on the podium too on occasion. The current, 2019, Xterra World Champions are ITU star Florra Duffy (BER) and long distance triathlete Bradley Weiss (SAF). It was Duffy’s 5th title in Maui and Weiss’s 2nd. Javier Gomez won it in 2012. Is there anything he can’t do?

Japanese automaker Nissan licensed the XTERRA name from the triathlon series for their sport utility vehicle. Nissan also sponsored the Xterra Series from 1998 to 2006