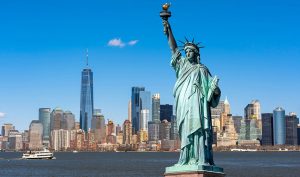 How about this for a triathlon course: swim in the Hudson river, cycle through Manhattan and the Bronx and run in Central Park. Four-times Olympian Hunter Kemper’s record of 1:41, helped by a favourable current in the Hudson River, was set in the inaugural event in 2001 and still stands to this date.

New York is still part of the (once famous and lucrative) Lifetime Triathlon Series, which it joined in 2007. Although never as rich as its big brother in the Series, Minneapolis, New York is still a very popular age group race just because of its epic location and course.

The title of this article is not just a line from Sinatra, but hints at the anticipated early sell out, as from next year onwards New York is limiting its participant numbers.

New York also hosted the US Ironman Championships in 2012. It was the first time an Ironman was held in New York and it hasn’t happened again, as the logistics were just to great. A sewage leak 2 days before the event and the drowning of an athlete (a HK police officer) also caused more athletes than the event had wished for.