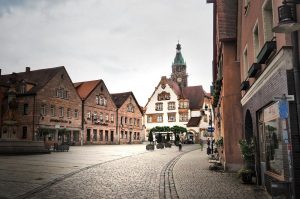 Roth’s long distance triathlon dates back to 1984 and was an immediate success. In 1985 it organised the Bayern Championships, in 1986 the German Championships and in 1987 the European Championships. In 1988 they obtained the exclusive rights to organise Ironmans in Europe. Ironman Roth was for many years the biggest triathlon in Europe.

In 2001 Ironman demanded a higher license fee, a lower limit to the number of participants (1,800 instead of 2,700) and did no longer agree to exclusivity for the Roth organisers to the Ironman brand in Europe. Also entry fees had to increase and only mass starts (no longer start waves) were allowed.
Relations between the Roth organiser and the WTC had already grown sour over the years.  Roth accused the WTC of commercial skulduggery, decided to part ways and continue as Challenge Roth. Challenge Roth continued its success as an independent race and started the “Challenge Family” series in 2005 with Wanaka the first destination to sign on.

In 2003, Challenge Roth, saw the closest finish in Iron distance racing ever. Lothar Leder (GER) pulled away from Chris McCormack (AUS) in the final 400m to win by 3 seconds.

Besides its stacked field of triathletes vying for a big prize purse, Challenge Roth is known for its amazing atmosphere and ‘a million’ spectators along the route.