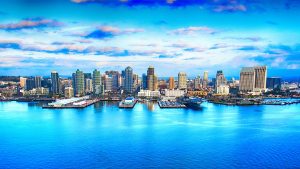 In 1974, Jack Johnstone and Don Shanahan of the San Diego Track Club started the first “triathlon”. It was during the 70s jogging craze, when biathlons (swim-runs, before they were called Aquathlons) started to enter the scene. Adding a bike leg was their invention and they named it triathlon in the fashion of other multi-sport events (biathlon, heptathon)

The “Mission Bay Triathlon” consisted of a 5km run, 8km bike and a series of short swims with intermittent runs. With safety at stake – participants were cramping during the swim – the order of disciplines changed over time into swim-bike-run and triathlon as we know it was born!
Side note: swim-bike-runs were already in existence in the early 20’s in France (see Joinville-Le-Pont), but did not break through as it would in the 80s.

Judy and John Collins were among the 47 participants in the first triathlon, which inspired them to start the first Ironman event in Hawaii (see Kona section).