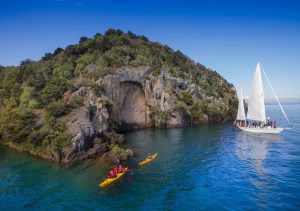 When talking about Taupo, the mention of Cameron Brown is never far away. This triathlon legend has won Ironman New Zealand an incredible 12 times! The 48-year old has not given up on another title yet and claims he is running better than he did in his early twenties. There was no measure on Joe Skipper (GBR) in 2020 though. The conditions were perfect, which resulted in very fast times. Skipper won in 7:54. Brown finished 6th in 8:14. Teresa Adam (NZL) crushed the women’s competition in 8:40.

Ironman New Zealand is the oldest Ironman in the world after Kona. It was, with the Japan Long Distance triathlon at Lake Biwa, the first qualifiers for the event in Hawaii. It was not always held in Taupo though. From 1985 to 1998 it was held in Auckland. Taupo became the port of call from 1999 onwards. Besides its heritage, the success of Ironman New Zealand is very much thanks to the support that the small tourist town throws behind the event. Overwhelmingly athletes come back with stories of the welcoming and friendly ambience.

Although New Zealand has cautiously started to return to normality, triathletes qualified for the 2020 World Championships Ironman 70.3 in Taupo are anxiously wondering whether the event will actually take place.